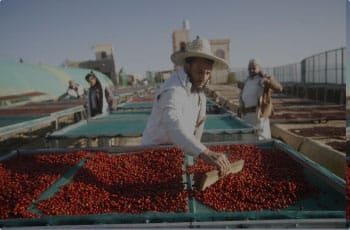 Witness the Birth of Coffee

Over 500 years ago, in the picturesque hills of Yemen, the coffee industry was born. The monks in the remote Sufi Monasteries were the first to take advantage of the unique climate to cultivate coffee plants and brew them into what we know today.

Yemen may not have been considered the ideal place to grow coffee plants, but the farmers took advantage of the hilly terrain and turned the region into the world’s only source of the stuff for 200 years. Over the years, they perfected a system of terrace growing, hand picking, and sun drying that gives the beans a unique flavour profile, and which is still used by farmers in the region to this day.

The beans were transported by camel from the highlands to the port of Al Mokha, also known as the Red Sea port of Mocha, from which tons of beans would be shipped all over the world to meet growing demand. It was here that the words “mocha” and “Arabica” started to be used for the first time to describe coffee.

By the 1600s, coffee had become popular in Europe and coffee shops started to sprout up around the world.

The rest, as they say, is history.

These days, Yeminis call the beans “Red Rubies” and folk songs are sung during the harvest. The farmers carry sacks full of coffee on their backs to pick-up trucks before undertaking the drive through dangerous mountain roads to be dried.

We work with them to ensure that we can bring you the best quality Yemeni beans, while also giving them a fair price for their labour of love.

Just remember that with every sip of a cup of coffee from Yemen, you’re tasting over 500 years of history.